ISLAMBAD, Jan. 21, 2021 /PRNewswire/ — People can now watch Phoollu’s videos to learn all about what rural life is like in Pakistan in a fun way. Phoollu, a Pakistan farmer known for his country-life videos and comedy style, shares about his daily life to his million viewers on SnackVideo, a new and rising short video platform in Pakistan. 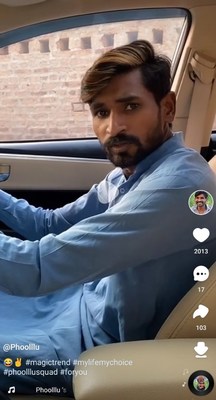 Tauqeer Abbas, better known as Phoollu, has captured the attention of millions of fans on the Internet by documenting details of his daily rural life. Now, this man has become a rising star on SnackVideo and attracts millions of users daily.

In these down-to-earth videos, audiences can see him planting rice seeds or dancing with local villagers along with the music. From the start, he was way separated from the Internet and had no experience in making short videos. “One day I was in the field cutting wheat as usual and accidentally made a video with a friend. That video went viral surprisingly and got millions of views. More and more people started to know me and wanted to take videos and selfies with me”, said Phoollu.

From an inexperienced creator to a short video guru with millions of fans, Phoollu couldn’t wait to share his videos on SnackVideo. He said: “I always want to provide great content for my fans and SnackVideo is a community with such diverse content. A 15-second video seems short, but it has changed my life dramatically.”

Phoollu is not the only iconic social media star who has joined SnackVideo and shares his insights with the world. Pakistan’s most well-known web celebrity Kanwal Aftab, the beauty and makeup influencer Hoor Mahaveera, the hilarious video maker Asadray are all coming to SnackVideo and share their journey of being popular on this video pIatform.

Now, SnackVideo has launched its first Creator Academy in Pakistan with the participation of more than 20 experienced KOLs to help prospective content creators. It is also offering a PKR 1,000,000 reward for outstanding creators in this campaign.

Join SnackVideo, From Zero to Hero. Everyone has the chance to be seen and become the next world-famous KOL on SnackVideo. Visit https://m.snackvideo.com/pbact/10/2021/SnackActingStar to follow SnackVideo Creator Academy.